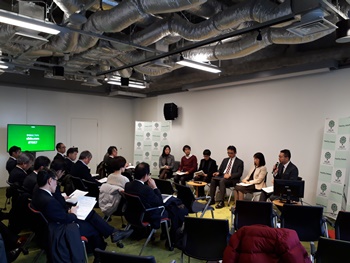 Thank you for your continued support for the Health and Global Policy Institute(HGPI). HGPI has been working to help citizens shape health policies by generating policy options and bringing stakeholders together as a non-partisan think-tank since our establishment in 2004. Thanks to everyone’s continued support, we are pleased to announce that HGPI was once again ranked highly for the 9th consecutive year in the University of Pennsylvania’s 2017 Global Go To Think Tank Index Report.

The 2017 edition of the Index was published on January 30, 2018. In commemoration of that, many simultaneous events were organized by research institutions all around the world to discuss the role of think tanks. HGPI also convened an event on that day entitled, “The Role of Think Tanks ? Shaping the Future with HGPI ?.” The goal of the event was to review our activities, focusing on project reports from FY2017, and to discuss project plans for FY2018. There was also a discussion panel featuring multiple stakeholders on the role of think tanks in general, and HGPI specifically. We shared opinions on how to improve our activities.
Over 175 organizations worldwide in over 100 cities hosted Why Think Tanks Matter Events on January 30, 2018. The panel discussion featured a lively exchange between the panelists and the audience on the various topics already presented during the meeting. A new system was used for this discussion, in which questions submitted via the internet were answered in real-time during the discussion.

What is the Role of Think Tanks in Japan?
The meeting also had a comprehensive discussion on the role of not only HGPI, but think tanks in general, including about the roles that think tank should fulfill and the issues of each stakeholder. Panelists and audience members shared comments including, “I want you to create a place where people can share their ideas equally so that everyone can go act beyond their respective positions and work towards common goals,” “It is important to widely disseminate various proposals by involving members of the media and to raise issues among the public.” Many expressed the hope that HGPI would fulfill a unique role as a stakeholder that does not directly implement policy.

What is the Role of HGPI?
Following the discussion on the role of think tanks, panelists and audience members offered many points of view on HGPI in relation to progress on innovation and globalization in the healthcare field. Comments included “I would like you to continue discussing the value of innovation and the creation of a sustainable healthcare system,” and “I hope that HGPI will maintain both a local and global perspective, and not only bring in multiple stakeholders to make proposals, but also go one step further toward giving rise to action.” Many encouraging remarks were received towards HGPI’s activities in the coming fiscal year. Dr. Kiyoshi Kurokawa, Chairman of HGPI, expressed his gratitude to all participants and discussed the sense of crisis he feels about the various problems facing Japan, including the declining birthrate and aging population. He emphasized that everyone must be aware of their own strengths and weaknesses and should act to solve problems by themselves.