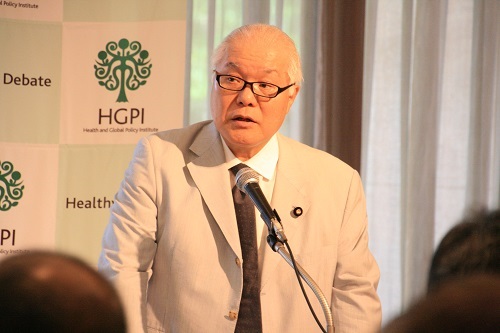 HGPI hosted a special breakfast meeting with Keizo Takemi, a member of the House of Councillors, as guest speaker, along with other relevant personnel.

Aging in Asia
Aging in Asia has become a global issue. In this April, the United Nations Development Programme (UNDP) stressed the need for measures to tackle aging from a human development perspective in its Asia-Pacific Human Development Report. Furthermore, the World Bank has said that it will release an analysis on this matter from a labour productivity perspective by May of next year.

We can gain further insight into aging in Asia by looking at our region’s age group distribution. It is evident that the size of the young population (14 years old and under) has been declining slowly since its peak in 1990. The population of people in the labor force (15-64 years old), is predicted to continue to decline towards 2045. We can say with confidence that the population of those age 65 and older will continue to increase.

Along with aging comes the issue of changes to the size of the dependent population. As a response to such changes, for the past 40 years Japan has been successfully implementing national health insurance and insurance for the elderly. The size of the dependent population reached a new level in 2016 in various Asian countries and will continue to increase.

The speed of aging and changes to the structure of diseases in each population
Aging in Asian countries has progressed at a much more rapid pace than in European countries. In Europe, the last wave of increases to the size of the population was seen in 1940. In the short time span since then, the Japanese population has grown quickly. From 2016-2026, the proportion of elderly people in the population will increase by 7% to 14% in the Republic of Korea, Taiwan, and China; whereas it will increase by 5% to 7% in Vietnam, Indonesia, and Myanmar.

The speed of aging in Asia has increased at a rapid rate. The proportion of people over 65 years of age living in Asia will rise to over 70%. Alongside this increase will come increases to mortality rates associated with diseases of the elderly, such as cancer, ischemic heart disease, and stroke. Changes in disease prevalence are now inevitable. We will need to have further discussion on how we can appropriately implement insurance services in each region given all of this. Sustainability in an aging society
We need to think about aging awareness at all ages. We need to reorient our goals related to making universal health coverage a priority across all fields of healthcare. We need a system that can sustain non-communicable disease treatments without imposing financial burdens on individuals in order to respond to aging in Asia.

When considering services for the elderly, one barometer to measure where and how people are living is the number of elderly people living alone. Around 50% of the elderly households in Japan consist of only single people or married couples. This figure has exceeded 90% in Germany and 70% in the United States. In Asia, the distribution is about 40% in China, 30% in Vietnam, and 25% in Indonesia, with very low percentages in Thailand and India. Because of industrialization and urbanization, relocations to urban areas have been increasing. The number of elderly households consisting of only single people or married couples will rise in the foreseeable future. Solutions are needed to confront this issue.

Although the proportion of people passing away in their own home was more than 82.5% 60 years ago, this figure has drastically decreased, down to 12.4% in 2009. Many elderly people pass away either in hospitals or care facilities now. The number of care facilities, as well as the number of special senior homes, are steadily increasing. These numbers have only further increased since the establishment of long term care insurance. There were 6,000 care facilities as of 2011.

There are expenses associated with building care facilities, and it may not be an absolute good thing for the elderly. These facilities are the cause of financial strain for health and long term care insurance plans, and depending on their sustainability, they may produce huge losses. It is important to expand home care and establish a sustainable system for elderly households comprised of single people and married couples only before establishing care facilities in Asian countries.

A proposal for the construction of a long term care taker cycle in Asia
Turning to problems in the healthcare workforce – it is expected that there will be a deficit of 380,000 care takers by 2025 in Japan. This problem is not limited to high income countries. Low-income country will also experience this same problem.

In Japan, there are around 50 enterprises working to develop long-term care projects in Asia. These include private sector companies, as well as medical and social welfare corporations. I strongly feel that these enterprises must adapt to local customs, rather than just exporting the Japanese way of doing things, in order to be effective. There needs to be basic education in order to establish the foundational knowledge necessary for caretaking. It is also crucial to provide opportunities that will allow caretakers to actively use the knowledge they gain.

Efforts to foster the caretaker labour force in Asia can help to make up for the lack of caretakers in Japan. The number of elderly people in Japan will reach its peak in 2030. I foresee the recruitment of foreign caretakers in response to the increasing service needs until the elderly population declines.

That said, this huge in-flood of foreign care takers will likely result in overconsumption in the labor force in Japan from 2030 onward. I propose that the caretakers then take what they learned in Japan and work to utilize their experiences in their own countries to the fullest. By creating this kind of cycle, in which caretakers come and go to and from different countries in line with each country’s needs, we can not only resolve the issues faced by both Japan and the rest of Asia, we can also help to further tighten the bond between countries and strengthen government cooperation.

The concept of health in Asia
We must reconsider the concept of health in Asia if we are going to initiate this care taker cycle among each country. Many Asian countries share the goal of creating a healthy and long-lived society that is both economically and socially active. Discussion should revolve around how to take measures to support the sustainability of healthy living in the light of the constant aging of the population in Asia.

If we are going to resolve the issues surrounding aging in Asian countries, we must measure the extension of healthy lifestyles. Elderly people who do not require healthcare can maintain temporary incomes, if, for instance, they are blessed with opportunities for employment. Such elderly people do not have to depend on the younger generations for support and can maintain their networks within society over long periods of time, depending on the duration of their independence. It is advantageous for both healthcare and the economy that the elderly remain economically independent.

The phenomenon of aging is also spreading into low and middle income countries. Before they must fully confront this issue, it is important that we design systems that can respond to aging and cultivate people who can provide services to the elderly. Frameworks need to be created allowing for the domestic provision of caretaking devices and medical equipment in cases where workers are required for the operation of such equipment. We also need to create a system for the provision of services within a short time period. These countries will be able to enjoy the benefits of Japan’s experience. We must think of systems that can sustainably support each country.

The situation moving forward
Up until now, population problems have been viewed as isolated issues within each country. We have been able to gain a deeper understanding of aging by examining the experiences of developed countries; however, just looking at these experiences is not enough to solve all our problems. It will not be enough for some countries to merely expand their healthcare industry until the time that they must face this issue fully. Cooperation with neighboring countries is essential. It is vital that there be effective coordination with developed countries.

Japan has succeeded in expanding its medicine and caretaking related industries constructing systems for the provision of services. However, these achievements only meet domestic needs. Our work must be adapted if it is going to suit the needs of other Asian countries.

Asia must not lose its dynamism. Cooperation with other countries to solve problems is going to be a new theme in health diplomacy.