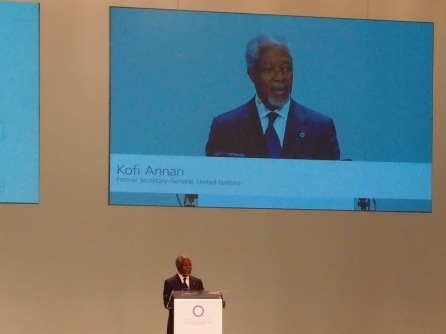 HGPI Director Ryoji Noritake recently participated in the European Diabetes Leadership Forum, held on the 25-26 April 2012 in Denmark, the EU presidency holder country for the first half of 2012.This forum was held as a meeting for high-level discussions on how diabetes control could act as a model case for progression in the area of chronic disease control. It aimed to reflect on the magnitude of the influence of diabetes prevalence in Europe, and hold discussions from the perspective of prevention, early detection, and improvement of treatment. The forum was organized by the Organization for Economic Co-operation and Development (OECD) together with the Danish Diabetes Association (DDA), with backing from the Danish government and Danish Health Ministry and support from the company Novo Nordisk. Around 760 people attended, with participants representing government, industry, academia, and patients present from all over the world, including EU Member States, European Free Trade Association Member States, EU non-member states, and OECD Member States.Speeches were also made by the Danish Prime Minister and Minister of Health and Welfare, as well as Kofi Annan, former U.N. Secretary-General. The importance of comprehensive approaches which transcend health policy frameworks was emphasized, together with the importance of policies which bridge patient and multi-stakeholder involvement in prevention with treatment. Furthermore, it was also re-recognized that diabetes control does not just end with the formulation of a road map as actual implementation is also important, and to this end patient empowerment and cooperative activities between different sectors were highlighted as being additionally important.