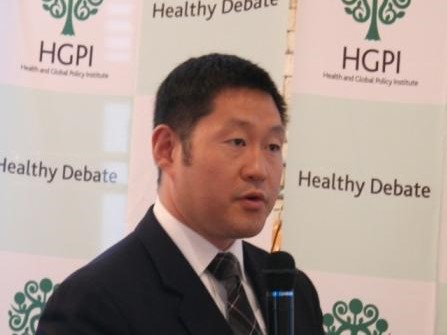 Prior to the meeting, each participant received a copy of the PowerPoint presentation, along with the Grand Vision plan and a map of the affected areas.

The meeting was called to order at 8:00 AM by Ryoji Noritake, who gave introductions and stated the purpose of the meeting: to update participants on Project Rising Sun. This project is in collaboration with Project HOPE, an American team of disaster relief specialists. Aside from a personal call to this project, HGPI became involved with Project HOPE because they were finding it difficult to make connections in Japan. Operation Rising Sun aims to dispatching medical needs to affected areas.

George Guszcza :  worked in the military and as a program manager for large-scale programs. He is interested in opportunities for Japan in the reconstruction phase, and has experience with 3 other cases.

History of Project HOPE: In 1958, Dr. Walsh recognized worldwide opportunities to save lives through education and modern medicine. He obtained a large ship through an appeal to the US President. Dr. Walsh then obtained donations to equip the ship with modern medical facilities. The ship was staffed with American doctors and an equivalent number of trainee doctors from underdeveloped countries. This underlines the mission of Project HOPE: to create sustainable, advanced healthcare infrastructure in areas of need.

Their first mission was to Japan, so Project RISING SUN is like “returning to birthplace” of Project HOPE

In addition to natural disasters, Project HOPE deals with man made disasters. In order to serve affected areas, special projects provide all of Project HOPE’s partnerships, donors, and volunteers.

They operate one boat each on the Pacific and Atlantic Oceans, doing scheduled tours yet always ready to head to a disaster area. A new boat is in the works.

Introduced Fredrick Gerber (country director), who came strait to Japan to make connections after the disaster

The Japanese responded to the disaster head on. There were quick local responses and clean up efforts, people are not dying because of the aftermath. However there is now a stillness in relief efforts.

There needs to be a stronger consensus. Groups are not centralized or connected. Without this, Japan will miss out on the ability to create a system of systems, rather then scattered systems. Without looking at synchronization of NGOs, donations, knowledge, and efforts, there are many individuals instead of one strong team. Without coordination, relief efforts will be very difficult, inefficient, and wasteful.

Non-Japanese groups find it hard to get involved. Many organizations have tried to come and help, but left without leaving behind what they wanted to give because it was too difficult. The price of cultural barriers is being paid by the people who have lost everything.

Without HGPI, Project HOPE would have faced the same barriers

Relief efforts must switch from reactive to proactive.

Debris is decomposing into the rivers, which goes into water tables of many places. A toxic stew is brewing while Japan is about to enter into the rainy season. Additionally, this horrible contaminated soup is sinking into the ground all over Northern Japan. Many volunteers are handling this waste without assessing the associated risks. The second phase of disaster relief consistently shows a market increase in upper respiratory illnesses.

There needs to be a proactive response plan. We don’t have one because there is no strong central system. Now is the time, not half way through the summer.

Shelters lack the small things, throughout all shelters in northern Japan, such as vacuum cleaners. Such small things can pose large threats and discomfort.  People have volunteered these supplies but have been turned away.

Restructuring the health care system in Iwate could be an opportunity to restructure healthcare across Japan. This temporary hospital could serve as a blueprint structure for all of Japan. Using Iwate as a case study, we have an opportunity to change the structure, facilities, demographics, and delivery methods of Japanese hospitals.

George ended with thanks to participants and to HGPI for providing critical support.

Ryoji Noritake: Many international organizations have left because the Japanese government and NGO’s turned down their offers. We must figure out how to avoid this problem in order to prepare for future disasters. HGPI is collecting best and worst practices from our current disaster, and will merge them into a policy recommendation.

Ryoji opened the floor to questions and comments

Audience: How do you define the end of the acute section of the program?

George: Acute phase is done. The acute phase is meeting needs immediately following the disaster: crisis medical care, cleanup, shelters, and creating a sense of normality. A big issue is that groups specializing in the acute recovery phase are withdrawing form the north. Project HOPE is focused on the chronic phase; looking at transitioning from disaster relief back to health and normalcy.

Ryoji: medical teams in Japan need to get back to their own businesses.

Audience: You have experience with a variety of disasters. How do you evaluate the size of the needed relief?

George: Providing medical care is essentially the same everywhere you go. Communication, transportation, and facilities are essential. Stabilization at the chronic phase requires more knowledge. Project HOPE has built projects and kits and outfits for different types of disasters, however it is very easy to build a standard kit.

The disaster area separated the strong and weak parts of Japan. The strong people are those working on the site, the weak are Japanese governmental leaders.

He has written an article on the poor performance of the government and come to realize that journalism in Japan is also weak. Mr. Edano was the face of the Japanese government during the acute phase, and was extremely uninformative. The government’s assumption was that since his information was given in Japanese, only Japan would know how lacking it was. However it was easily translated and now the entire world knows about this weakness.

TEPCO’s vice president appeared on TV, showing the world that Japanese company executives are weak. Even after this appearance, no one from the Japanese government, companies, or universities said anything against him.

People from the last generation are not good mentors to the new generation. This is seen in their attitude towards college kids, who can’t get jobs after graduation. Their attitude is that those kids will just become second class citizens.

Most of the people in top government positions never took risks. In the face of crisis, they have no idea what to do.

Japanese are good at reacting and creating short term plans, but not at planning way ahead or seeing the large picture.

The world’s leading nations all have similar issues. The first is an aging population. The second is that leaders don’t want to change much or have revolutions; they are comfortable with the current way. The third is the growing gap between rich and poor. The fourth is that government debt has become huge.

Japanese people are unable or uninterested in thinking about how world events are going to affect their future.

Japanese business, hospitals, doctors, and government only see their own company and experiences. People in top positions have a narrow point of view are generally unable to adapt to new ideas

The people in the disaster area either died immediately or survived and evacuated. There is no need for emergency medical attention, just long-term psychological and general medical care.

He spoke with Tohoku University and found that they were taking no action to lead their students in the face of disaster. He feels bad for these students.

The data of radiation levels has not been dependable. Citizens cannot extract data themselves, but can put pressure on researchers to provide data. Its very important for each individual to think about what they can do, and take action accordingly.

Japan revealed that they can’t handle a nuclear crisis, so now the world will not trust Japanese nuclear energy. Japan once had a reputation of being good with electronics; this reputation will take 20 years to rebuild.

Many kids in Tohoku lost their parents; providing care for them will be extremely important. He hopes that teachers and young students will get involved. It is very important for those kids to learn and have activities together, especially in the shelters.

There are a lot of bilingual volunteers. He hopes that young Japanese college students will work with those groups in order to improve their English. In order to truly learn English, you must spend time with native English speakers.