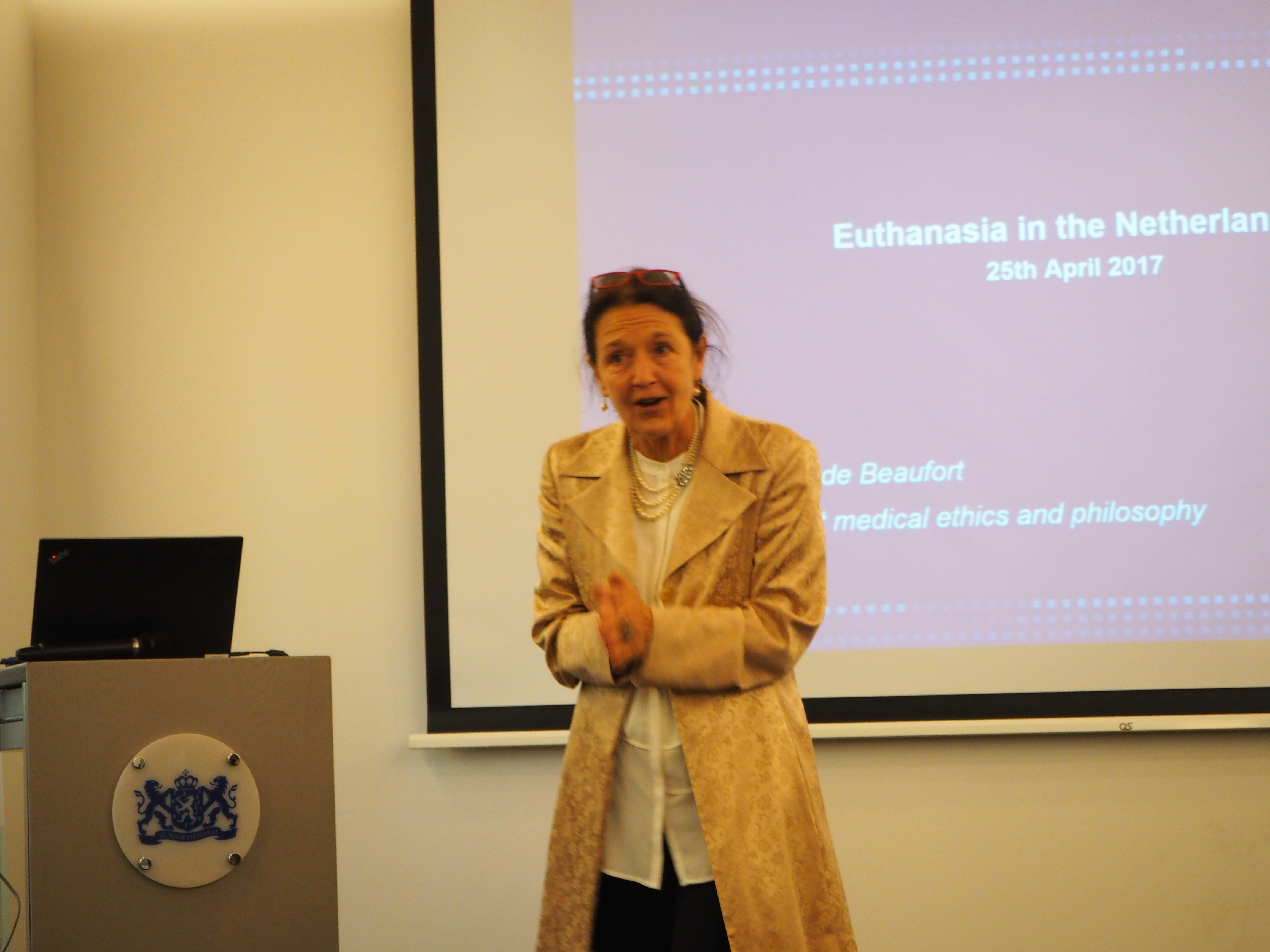 On Tuesday, April 25, 2017, HGPI held a Japan-Netherlands Expert Meeting together with the Embassy of Netherlands in Tokyo on the topic of “Medical Ethics in the Era of Advancing Technology and Aging.”

At the start of the meeting, Mr. Marc Gerritsen, Head of Economic Affairs of the Embassy of the Kingdom of the Netherlands, gave a brief welcome speech and explained the purpose and goals of the forum. Following his talk, Mr. Kiyoshi Kurokawa, Chairman of HGPI, spoke about the great international attention that the Netherland’s policies on palliative care is attracting, and emphasized the importance of this issue in a super-aging society like Japan.

Prof. Inez de Beaufort a lecture on the current situation in the Netherlands surrounding medical ethics.

The definition of euthanasia in the Netherlands is “when physicians decide to end a patients’ life according to their request.” Its sole purpose is to save terminally ill patients from unbearable pain. With advancements in technology, more and more treatments that can prolong life are being developed. However, it is important to consider whether such treatments are the best choice for the patient or not.

In the Netherlands, physicians are obligated to report all euthanasia cases to a local committee. There are five such committees, with members representing multiple stakeholders. The committees have the discretion to set judgment standards related to euthanasia. Out of 6,091 cases of euthanasia in 2015, 10 of them were judged to be illegal according to standards set by these local committees. These cases were examined by public prosecutors, but there were almost no charges brought against doctors, and no cases in which doctors were arrested.

The Netherlands has universal health coverage through mainly insurance plans managed by the private sector. In addition, the Netherlands has a robust primary care system, which ensures appropriate access to healthcare. Euthanasia is possible because of the solid foundation created by this basic health care system.

Nonetheless, euthanasia is highly controversial, and presents many issues. For example, physicians often feel pressured about making the ultimate decision to euthanize a patient. In recent years, there have also been some difficult cases in which terminal cancer patients could not communicate their desires due to dementia. Doctors map out patient courses for palliative treatment, and explain risks and procedures, including the possibility of euthanasia. It is also the responsibility of doctors to make the final decision about euthanasia based on the will of their patients. To relieve some of the pressure on physicians who do not wish to euthanize patients, a group of physicians has created an end of life clinic, where doctors can thoroughly discuss this issue and monitor each patient’s treatment progress before euthanizing. This is an initiative that started a few years ago, and many patients find it helpful.

The Netherlands is a relatively small country with a population of 17 million in a land area that is about the same as Kyushu. Within the primary care system, there are strong relationships of trust among patients and doctors. The Dutch are socially tolerant of various values and ethics, and tend to respect the freedom of thought and expression of each individual. The fact that the Netherlands is such a mature and civilized society was the most significant factor in making the legalization of euthanasia possible. Recently, there have been social movements to establish a new law to legalize assisted-suicide by people who aren’t physicians. It is important that the public be involved in thorough discussions about this issue.