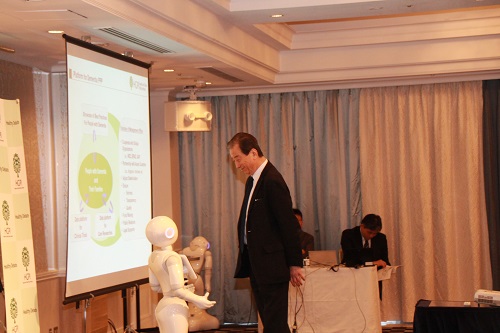 The 36th Special Breakfast Meeting was convened on March 17, 2017. Its theme was “Project Outcome of Dementia PPP Research and the Future of International Cooperation.”


HGPI is conducting a research project, the “Initiative for the Advancement of Dementia Research and Social System Innovation through Global Public Private Partnerships (PPP).” This project is sponsored by the Japan Agency for Medical Research and Development (AMED)

In this breakfast meeting, Dr. Kiyoshi Kurokawa, the project’s lead researcher, shared the outcome of the project, talked about the PPP model that is being proposed as a result of the project and various discussions, and explained trends in international dementia studies that the project group heard about at a recent World Dementia Council (WDC) meeting. Dr. Kurokawa explained that the WDC was launched in 2014 by David Cameron, former Prime Minister of the United Kingdom. The United Kingdom hosted the G8 summit in 2013, including the G8 Health Ministers’ Meeting held that December. At that meeting, participants discussed dementia, and made the decision to launch the WDC in the following year. In 2016, the WDC was accredited by The Charity Commission and declared that from that year forward, “WDC Goes Global.” Currently, the HGPI is collaborating with all five of the teams working in the WDC (Care Team / Finance Team / Integrated Development Team / Risk Reduction Team / Research, Open Science and Data Team).

Dr. Kurokawa gave a presentation at the WDC meeting held in Paris, France in February. During this breakfast meeting, he reported on his presentation, and shared the ideas discussed at the WDC with meeting participants.

Among those ideas, Dr. Kurokawa touched on the potential of robots and ICT for dementia care. Pepper, a robot created by Softbank, made a showing at the meeting. Pepper conversed with Dr. Kurokawa, and explained programs being implemented at nursing homes, as well as future prospects for care using robots. Research is underway to  investigate models for global Public Private Partnerships (PPP) focused on dementia research, with the aim of identifying the best possible PPP models for Japan, and in the hope of potentially putting such models into practice.

In the Q&A session, participants and advisory board members exchanged ideas on the research project.