[Registration Open] (Webinar) The 97th HGPI Seminar – The Role of the Administration and Steps for Future Reform to Correct Unhealthy Work Styles at Kasumigaseki (July 28, 2021) 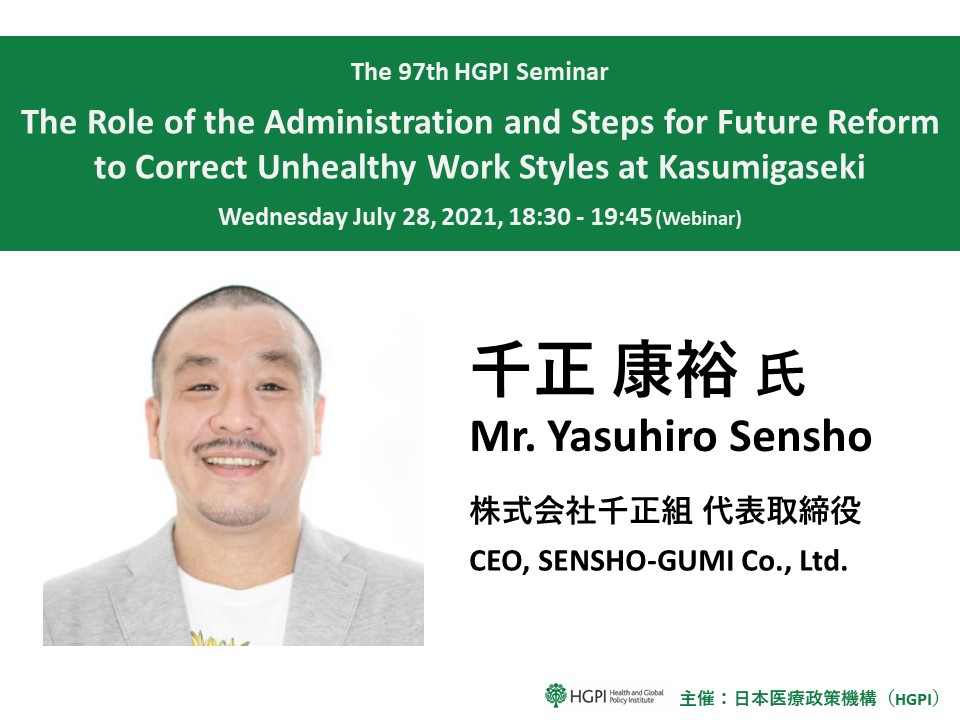 The Coronavirus Disease 2019 (COVID-19) pandemic has had significant socioeconomic impacts on Japan, including the declaration of a state of emergency. Daily media coverage regarding infection control, the healthcare provision system, and the long-term care provision system has heightened public concern toward Japan’s social security policy to a degree never seen before. Among these developments, interest is also increasing in unhealthy work styles at the Ministry of Health, Labour and Welfare (MHLW) and related ministries which were highlighted during the COVID-19 response and other events. At a House of Representatives Committee on Health, Labour and Welfare meeting on June 2, 2021, it was mentioned that one in five MHLW officials (a total of 830 people) worked more than 80 hours of overtime in April 2021. Eighty hours of overtime per month is considered the threshold for heightened risk of death by overwork.

This severe work environment was a known issue even before the COVID-19 pandemic. In a proposal submitted in August 2019 entitled “Emergency Proposal from the MHLW’s Young Reform Team,” recommendations were proposed on topics like increasing headcount, improving productivity, and optimizing methods for responding to advisory committees or the Diet. Severe working conditions and excessive working hours are not only experienced by officials at the MHLW; these problems affect everyone working at Kasumigaseki, the seat of the Government of Japan. In December 2020, experts in the private sector and academia created the “Proposal on Work Style Reform at Kasumigaseki” which collected 27,000 signatures, and in May 2021, the LDP’s Administrative Reform Promotion Headquarters Project on Reform of the Public Official System compiled recommendations on work style reform at Kasumigaseki and submitted a request to Prime Minister Suga in May 2021.

To contribute to improving this situation, Health and Global Policy Institute (HGPI) has kicked off a new project in FY2021 called the Project for Work Style Reform in Kasumigaseki. In this project, we will compile and present joint proposals with opinion leaders in this field from industry, Government, academia, and civil society with the intent of contributing to further progress in Japan’s social security policies.

With this backdrop, the upcoming HGPI Seminar will feature Mr. Yasuhiro Sensho, who was previously involved in legal reform in the field of long-term social security and labor at the MHLW and now serves as CEO of SENSHO-GUMI Co., Ltd. Mr. Sensho published a book titled Black Kasumigaseki[1] in November 2020 in which he called for work style reform in Kasumigaseki and made specific recommendations for doing so that were broadly publicized in the media. At the seminar, Mr. Sensho will describe the current situation regarding work styles at Kasumigaseki, challenges facing work style reform in Kasumigaseki, and the reforms needed to provide better policies by advancing work style reform. He will also discuss current efforts being made at SENSHO-GUMI to bridge the gap between the public and private sectors. As public interest in healthcare policy has been heightened due to the COVID-19 pandemic, we would like to take this opportunity to deepen our understanding of current issues facing the policy formulation process and efforts that show high potential for future progress together with everyone in the audience.

Please note that this seminar is available in Japanese only. An English report of this event will be published in due course.

[1]Our use of “black” in “Black Kasumigaseki” reflects the Japanese title of Mr. Sensho’s book. In Japanese, the term “black” can refer to companies, organizations, or environments that generally force their employees to work long hours, overload their bodies, and strain their mental health, or workplaces where such unhealthy work styles have become the norm.

■ Profile
Mr.Yasuhiro Sensho (CEO, SENSHO-GUMI Co., Ltd.)
Mr. Yasuhiro Sensho was born in 1975. He graduated from the Department of Political Science at the Keio University Faculty of Law in 1999 and joined the Ministry of Health, Labour and Welfare (MHLW) in 2001. After working in the Pension Bureau and in various other positions, he served as Deputy Director of the General Affairs Division, Minister’s Secretariat and as Secretary to the Minister of Health, Labour and Welfare. After that, in 2013, he was made responsible for drafting the Act on the Safety of Regenerative Medicine as Deputy Director of the Research and Development Division of the Health Policy Bureau. As the first official from the MHLW to serve as First Secretary of the Japanese Embassy in India, he initiated exchanges between regulatory authorities in Japan and India to simplify the examination process for Japanese medical devices in India. In 2016, he returned to the Ministry of Health, Labour and Welfare, where he served as Deputy Director of the Equal Employment, Children and Families Bureau in the General Affairs Division. In 2017, as Deputy Director-General for Policy Planning in charge of Social Security, he worked on social security projections for 2040, the Basic Policy for Economic and Fiscal Management and Reform, and systems for accepting workers from overseas. In 2018, he was appointed Deputy Director of Health Policy Planning at the Health Policy Bureau of the General Affairs Division, where he engaged in efforts for physicians’ work style reform. In 2019, he retired from the MHLW at age 44. He established SENSHO-GUMI Co., Ltd. in 2020 where he continues focusing on the field of healthcare and welfare provision by providing consulting services, supporting companies who wish to expand in India, issuing policy proposals, penning articles, and making media appearances. He also serves as a member of the Gender Equality Bureau Cabinet Office Security and Safety Working Group and as a member of the Ministry of the Environment’s Advisory Council on Accelerating Work Style Reform. He serves as an expert commentator on digital affairs for Asahi Shimbun and as a specialist member of PoliPoli Inc., has given many lectures at healthcare organizations, and is the author of Black Kasumigaseki (published by Shincho Shinsho). He has a column on physician work style reform on m3 and writes for the “Textbook for Human Resources in Policy,” a subscription magazine from Note.