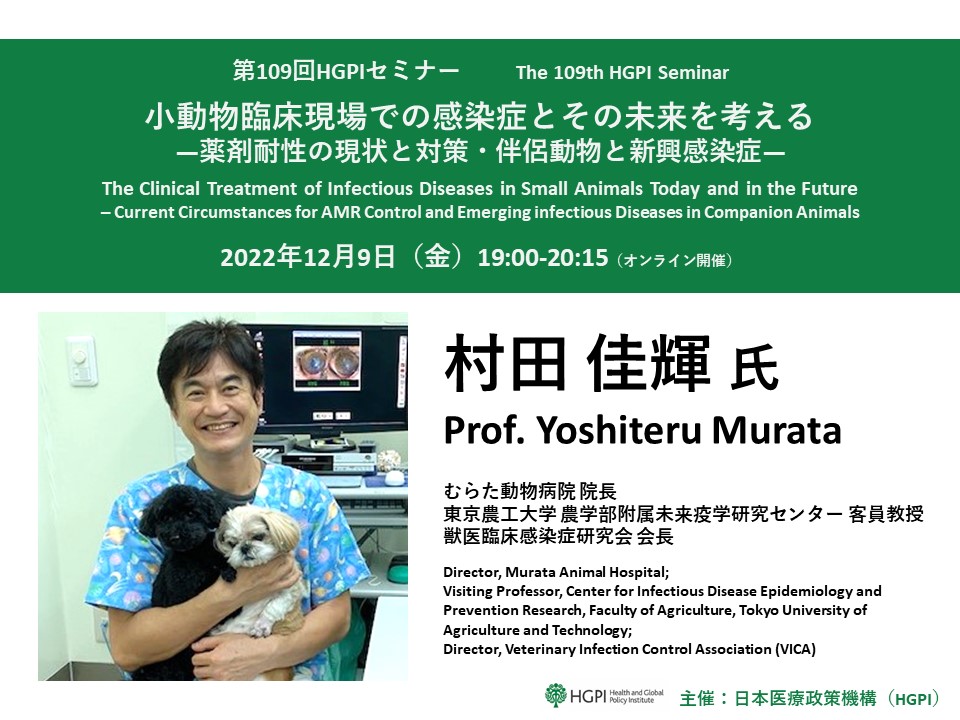 The seminar will feature Professor Yoshiteru Murata, who is Director of Murata Animal Hospital and the Veterinary Infection Control Association (VICA), a Visiting Professor at the Center for Infectious Disease Epidemiology and Prevention Research of the Tokyo University of Agriculture and Technology Faculty of Agriculture, and one of Japan’s leaders in Antimicrobial Resistance (AMR) control in pets. Professor Murata will describe the relationships among pets and AMR and examine the problem of AMR from a One Health perspective.

Antimicrobial resistance, or AMR, is the process by which bacteria and other microorganisms change over time and grow resistant to treatment due to the use of antimicrobials and other substances that target such organisms. When someone is infected with bacteria that has acquired resistance, called AMR bacteria, they cannot benefit from the full therapeutic effects of antimicrobials, which can worsen their overall physical condition or, in the worst cases, result in death.

It is estimated that AMR is the direct cause of at least 1.27 million global deaths each year. In Japan, an estimated 8,000 people die annually from bloodstream infections caused by methicillin-resistant Staphylococcus aureus and fluoroquinolone-resistant Escherichia coli.

In the backdrop of growing interest in the One Health approach, global experiences with the Coronavirus Disease 2019 (COVID-19) pandemic have been a major factor that has reminded people of the dangers of Zoonosis. Moving forward, the One Health approach is not only likely to be applied to AMR and other health crises like emerging and reemerging infectious diseases, but will also become a frequent topic of discussions held throughout the health sector.

However, discussions on AMR control in Japan still tend to take place within the context of healthcare for people, and despite devoted efforts from related parties, awareness levels toward initiatives in areas of AMR control outside of human health are low. For example, the Japan Nosocomial Infections Surveillance (JANIS) was launched in 2000 to monitor AMR in healthcare institutions, but a system for monitoring AMR in the veterinary field called the Japanese Veterinary Antimicrobial Resistance Monitoring System (JVARM) was introduced at around the same time, in 1999. Moreover, discussions on AMR control in pets have just started. As a matter of fact, with a realigned focus on surveillance, AMR monitoring in pets began only recently after the formulation of the AMR Control Action Plan in 2016. This initiative can serve as a global leader and its efforts for AMR control that cut across sectors embody precisely what we need right now: discussions from a One Health perspective.

The One Health Joint Plan of Action (OH JPA) was recently presented in October 2022. It outlines the commitment of the Quadripartite organizations* and identifies AMR as a key area for global action in the future. Additionally, the WHO has also designated the week of November 18 to 24 to mark its annual World Antimicrobial Awareness Week (WAAW). This year’s slogan is “Preventing Antimicrobial Resistance together.” In Japan, every year since 2016, the Cabinet Secretariat has designated the month of November as “AMR Awareness Month.” Furthermore, AMR Alliance Japan was established by HGPI in 2018 as an independent platform for cross-disciplinary, multi-stakeholder discussions on AMR control, and has continued to offer policy recommendations, disseminate information, and take action for AMR.

At this HGPI Seminar, our guest Professor Yoshiteru Murata will be giving a lecture on AMR control centered on pets, which are the animals that are closest to people. In addition to fulfilling his everyday clinical duties as a veterinarian, Professor Murata is a leader in domestic AMR control for pets as the director of VICA, where his activities have included leading a survey that examined AMR in pets and compiling the first guidebook for veterinarians on appropriate antimicrobial usage titled, “Guidebook on the Careful Use of Antimicrobials in Pets, 2020 ed.” Professor Murata will discuss current circumstances for AMR in the field of pets, the relationship between AMR in pets and other fields including the human field, and potential future developments. While taking a fresh look at AMR as a global issue based on Professor Murata’s past experiences, we would like to take this seminar as an opportunity for considering each issue an item that is close to us and for reexamining actions for preventing AMR based on a One Health approach that we can all take together.

*The Quadripartite includes the Food and Agriculture Organization (FAO), the United Nations Environment Programme (UNEP), the World Health Organization (WHO), and the World Organisation for Animal Health (WOAH) which was established by the Office International des Épizooties (OIE). In October 2022, the Quadripartite presented the One Health Joint Plan of Action (OH JPA) which outlines actions to be taken for the One Health approach for the five years from 2022 to 2026. The OH JPA identifies AMR as an area requiring global attention, with “curbing the silent pandemic of Antimicrobial Resistance” as one of its action tracks.

Please note that this seminar is available in Japanese only. An English report of this event will be published in due course.

Prof. Yoshiteru Murata (Director, Murata Animal Hospital; Visiting Professor, Center for Infectious Disease Epidemiology and Prevention Research, Faculty of Agriculture, Tokyo University of Agriculture and Technology; Director, Veterinary Infection Control Association (VICA))
Professor Yoshiteru Murata graduated from Kitasato University School of Veterinary Medicine in 1980, where he also earned a Master of Veterinary Medicine degree in 1982. He then served at Sawaki Dog and Cat Hospital (now Sawaki Animal Hospital) and assumed the role of Director of Murata Animal Hospital in 1984. In 2009, he earned his Doctor of Medicine degree in Medical Mycology from Chiba University Graduate School of Medicine and Pharmaceutical Sciences. In Japan and overseas, he has authored a number of papers and books related to infectious disease in pets. He also serves as Director of the Veterinary Infection Control Association (VICA), an association of experts in clinical infectious diseases in small animals established in 2013, and was presented with the 2019 Award for AMR Awareness-Raising Activities by the Cabinet Secretariat for excellent practices in AMR control. His various efforts have included participating in surveys of AMR bacteria isolated from pets; formulating guidelines for veterinarians; and disseminated information on antimicrobial stewardship and its importance through speeches at academic conferences or related symposiums, by participating committees conducting case studies, and by contributing to various professional journals. He is working to advance AMR control in clinical settings for pets while taking One Health approaches that encompass humans, animals, and the environment into account.