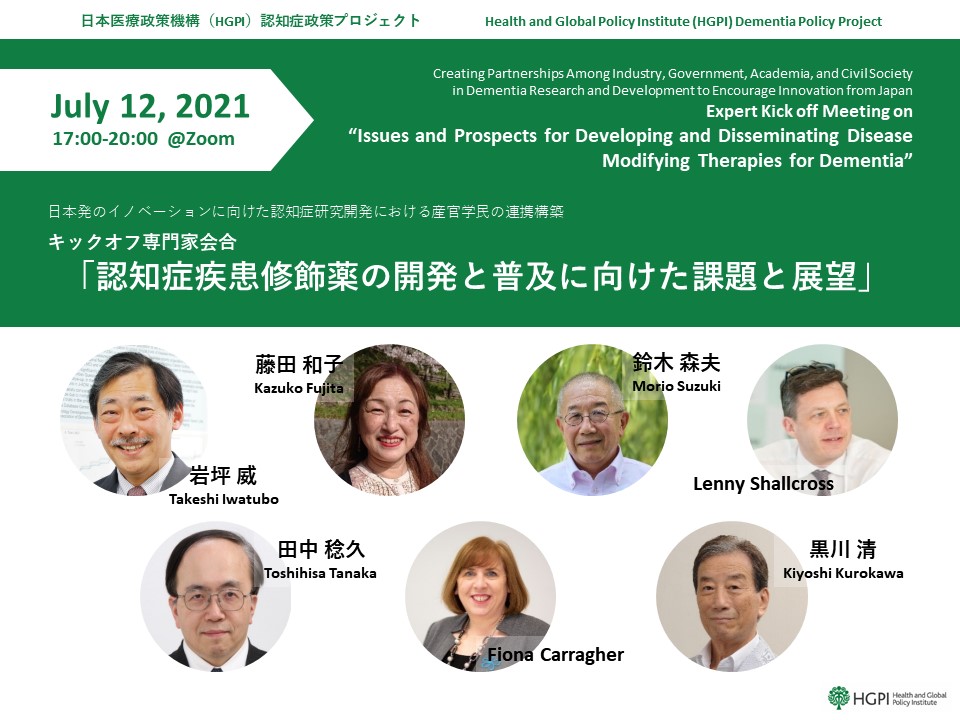 Recognizing dementia as a global health policy issue, Health and Global Policy Institute (HGPI) has made continuous efforts in its capacity as a non-profit, independent health policy think tank to promote policy responses to dementia-related issues. Based on the pillars of building a global platform to advance multi-stakeholder collaboration in dementia policy promotion, emphasizing the perspectives of those most affected, and identifying and disseminating policy issues, HGPI is advancing efforts while strengthening partnerships with various stakeholders.

In 2012, it was estimated that there were 4.62 million people living with dementia in Japan. This figure accounted for 15% of the elderly population. In projections for 2025, their numbers are expected to grow to 7 million people or 20% of the elderly population. The National Framework for Promotion of Dementia Policies formulated in June 2019 includes measures for research on dementia onset and progression, the development of treatments, and the establishment of an infrastructure that can serve as the basis for promoting research and development. Along with the creation of a dementia-inclusive society, research and development of disease modifying therapies (DMTs) for dementia and the establishment of systems for their widespread use are urgent issues for Japan, where population aging is advancing.

For Alzheimer’s disease (AD), the cause of approximately 60% of all cases of dementia, it has been reported that recruiting subjects for clinical trials takes two to ten times longer than the trials themselves. This may be considered a major hurdle for R&D. To address issues like this, the Japanese Trial Ready Cohort (J-TRC), which began operating in October 2019, monitors cognitive function among people without dementia and serves as a platform to connect researchers with people who can participate in clinical trials for pharmaceuticals for AD prevention. In the future, it will be necessary to further improve this system by implementing best practices from other fields, such as by using patient-researcher collaboration to develop cohorts like in the field of oncology. As of March 2021, 28 clinical trials for AD pharmaceuticals are underway in Japan and around the world and one pharmaceutical is under review for approval in the U.S., Japan, and other countries. Expectations for the launch of the world’s first pharmaceutical for dementia are high. However, these new pharmaceuticals are likely to be expensive and will be used by an extremely large number of people, meaning that providing them with health insurance coverage will pose major challenges for healthcare financing. It will also be necessary to create a screening system for new pharmaceuticals that will examine them according to clinical applicability standards. In particular, it will be essential that the system is expanded so it can detect target biomarkers and provide early diagnoses when screening people in the very early stages of dementia. There is much anticipation regarding the use of digital technology in these areas. In addition to establishing and promoting a better environment for R&D, it will also be necessary to examine how to promote the clinical use of new DMTs that are likely to be launched in the near future.

From these perspectives, HGPI’s Dementia Policy Project will hold an expert meeting and other events this fiscal year to promote R&D with the aim of achieving innovation from Japan in an initiative titled “Creating Partnerships Among Industry, Government, Academia, and Civil Society in Dementia Research and Development to Encourage Innovation from Japan.” After holding meetings with representatives from industry, Government, academia, and civil society, we will organize discussion points raised at those meetings, identify next steps, and release policy recommendations on steps for promoting collaboration in the future. To begin the initiative, participants at the expert kick-off meeting will explore issues related to R&D for DMTs in the field of dementia and identify challenges facing their clinical dissemination through discussions with industry, Government, academia, and civil society. We will also consider what future measures must be taken from a multi-stakeholder perspective.

■Program (Titles omitted; tentative)*Please note that details regarding program content and speakers are subject to change.

[Program and Biography of Speakers]Expert Kick-off Meeting – Issues and Prospects for Developing and Disseminating Disease Modifying Therapies for Dementia(July 12, 2021)